Lombok - the quiet sister of Bali

Lombok is indeed a newly discovered paradise for property seekers and investors. This is mainly because of its pristine and immaculate beaches, unbelievable landscape with fantastic views and because of the fact that beach land, villa and home property prices in Lombok are still reasonable and affordable. Many prospective land, villa and house property buyers select Lombok because of the serenity, clear blue waters, white sand beaches and the purity of the Island.

Lombok is seeing a renewed popularity since late 2005 with already many house and villa developments built or being built in and around Senggigi, Sekotong and Kuta in South Lombok. Because of this recent popularity, asking prices for real estate are subsequently on the increase.
The south of Lombok has also become more preferable with potential buyers because the new international airport in central Lombok has been opened and the huge Mandalika Resort development with luxury residences, Hotels, Villas, facilities and last but not least the Mandalika Grand Prix racetrack for international MotoGP on an area of more than 1.000 ha in the south near Kuta has been started.

Lombok is about three-quarters the size of Bali and is estimated to have, surprisingly, approximately 2.5 million inhabitants making it slightly more densely populated than Bali. As well, Lombok lies only 8 degrees South of the equator. As such, the weather is tropical. Days are almost universally 12 hours long with sunrise at approximately 6:20 a.m. and sunset at 6:30 p.m. depending on the time of year. The daytime temperature averages between 27°C to 32° C along the western coastal area (the main tourist venue). Average temperature inland is 29° C to 34° C. Moreover, if you plan to climb Mt. Rinjani bring a sweater, at 3,726 meters it is Indonesia's second highest mountain and gets surprisingly cold up there.

Lombok's tropical monsoon climate has two distinct seasons; dry (May to September) and wet (October to March). Monsoon refers to the wind, not the rain. However, even in the wet monsoon the rain tends to be localized and short lived. Weather-wise May, June and July are generally considered the best. 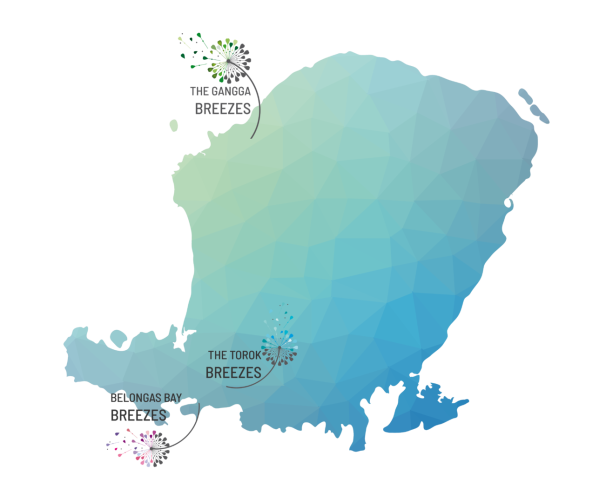